When we returned to school six days after Challenger rose and fell, it was not business as usual. One of the first things that happened was that the school enlisted, or perhaps ceded to the solicitations of, a team or teams of psychologists. Students were, at random, debriefed about their experiences before and after January 28. I was one of them. Had I had nightmares? Had I “pooped” my pants? Had trouble paying attention? Yada, yada. The results were probably published somewhere; I’ve never looked.

Before the launch, an senior and budding videographer (and standout pole-vaulter, if you must know) named Mark Alosa traveled around Concord filming various winter scenes raging from a snowstorm filmed at a gas station to people skating and sledding at White Park – footage that would be blended with launch and mission video to create a tribute to the entire affair, one with a hodgepodge of local flavors targeting the spirits of Christa and Concordians in general. Alosa chose a nondescript song by The Dream Academy, “Life in a Northern Town,” as the de facto theme song.

In a school assembly about a month after the disaster, the “final” video – conspicuously omitting anything from January 28, of course – was shown, and the Challenger events became bundled together with the aforementioned song immediately and forever, imprinted on my mind as a symbolic unit. Last year I was getting gas late one night at a BP station near Fort Lauderdale when I heard “Lights in a Northern Town” emanating from the speakers, and I half-expected the appearance of snow, the trail of a deadly light-and-smoke stream cleaving the sky.

At the same assembly, a female student, I believe Michelle Plourde, sang an a capella version of “The Rose,” the haunting ballad made popular by Bette Midler in a 1980 movie of the same name. This is a song that could crumble an audience at a World Wrestling Federation event. Here, it was devastating.

At the statewide indoor track and field championship meet the weekend after the tragedy, many of my friends wore black patches sewn on their singlets. I had broken my foot in November playing backyard basketball, or something like it, and missed the indoor competitive season while dodging snowbanks in a flexible flyer while wearing a walking cast. I had come to terms with this – but now missed running more than ever. 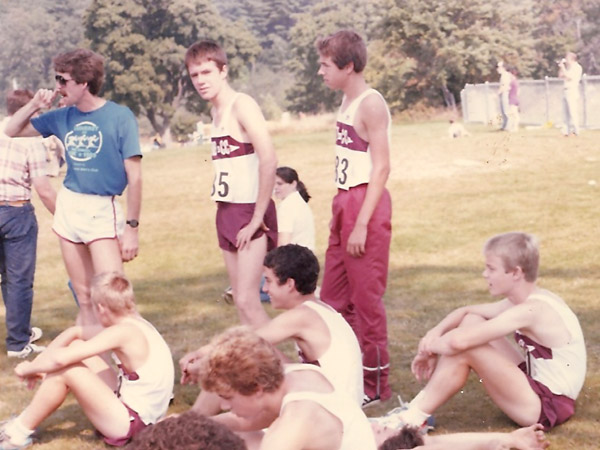 Believed to be the only surviving photo of Kevin Beck (R) from his sophomore year.

It wasn’t long before the “Crispa” jokes and many like it began making the rounds: What’s the last thing Christa McAluliffe said to her husband? You feed the dog, I’ll feed the fish! As lowly as the circulation of these seemed, we at CHS grasped that we could not simply demand to be quarantined from the bad taste of the rest of the country. Certainly this particular show had moved along a countless number of feet, ever since black humor first lined up alongside decor for the race of a lifetime.

Later in the year, other details emerged, including the filing of a $1 billion lawsuit by the widow of Challenger captain Michael Smith. Things like this came and went, and soon enough life was just like it had been. Almost.

A former Concord Monitor reporter named Bob Hohler, who sometimes wrote about out cross-country team (and decades later covered the Red Sox for the Boston Globe), wrote a biography, I Touch the Future, that he had begin work on was published in the fall. I and many others received it that year as a Christmas gift.

During a track practice in the spring of 1988, as I accompanied a group of teammates up Rumford Street, I realized I had never seen Christa’s grave, located somewhere in the mammoth expanse of Blossom Hill Cemetery. None of the other kids present had either. I decided it would be an interesting idea to start a pool: Everyone chip in a dollar (participation was mandatory), and the first one to physically tough the gravestone would collect to loot. I outsprinted a kid who would later become a college roommate, Chip DeAngelis, for the dubious honor of winning. We started at each other and the heavily decorated site as others caught up and began gathering around and doing the same thing. Without a word, the whole Vegas angle was scrapped.

In June, 1990, the Christa McAuliffe Planetarium, built near the grounds of New Hampshire Technical Institute north of downtown, was opened. Equal parts memorial and information center and visible from Interstate 93, it is the most prominent reminder to longtime residents of a person who was, perhaps more than any other, the source of both a lifetime of raised hopes and a fiery blast of sullied dreams.

I moved to Roanoke, Virginia in 2002. I soon noticed that a section of Route 460 northeast of the city, near Botetourt County line, was named Challenger Avenue. It seemed self-evident that the road had been renamed in honor of the doomed NASA mission, a suspicion I confirmed with a cousin who had lived there all this life. Every single time I have run past a sign with that name on it, I have thought of the eponymous spacecraft. It never quite ends.