My dad likes his toys, and he recently got one of these: 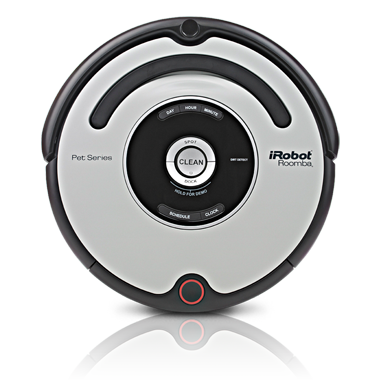 This is nothing more than a vacuum cleaner that operates on its own. It has infrared sensors that instruct the robot to turn as it approaches a wall, and since this doesn’t always work, there’s a large contact-sensing bumper on the front of the disc. Since there are many situations in which you would want the unit to turn even in the absence of a physical barrier (the junction between a carpeted living room and a tile kitchen, for example), the iRobot comes with several transmitters that resemble computer speakers and create a “virtual barrier.” It comes with a docking station for use after cleaning.

Developed through a joint venture between MIT and some entrepreneur, the iRobot (my dad’s is in the “Roomba” series and, given that there’s a Golden retriever in the house, is a pet-specific model) even has a software interface that allows savvy hackers to modify the robot’s behavior to their liking. Over two and a half million models have been sold to date.

Watching the thing in action really does summon forth images of an R2D2 that has been hammered nearly flat by a pile driver or car compactor. All that’s lacking are the beeps and chirps.