Actually, in some sense they may well be. But the two pictures show the same athlete. 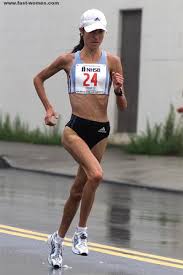 The 2002 version of distance runner Milena Glusac (left) tore up the U.S. track and road scene, recording times ranging from 32:15 for 10 kilometers to 2:31:14 for the marathon. Competitively dormant since 2004, the 34-year-old, 2010 version (right)–clearly healthier and more robust–is embarking on a comeback and, rightfully convinced she never reached her full potential even as she shone eight to ten years ago, is intent on bettering her times from her early to mid-20s.

One thought on “These are not two different runners”