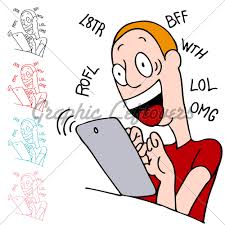 At various times, most often after a near-collision with some gawping halfwit walking or driving with his head lowered at a 90-degree angle from the anatomical position, I’ve concluded that if I were somehow given the power to eradicate all text-messaging from Earth with a snap of my fingers, I’d do it with little hesitation. Moreover, I’d do it even if the entire world knew that I was unique responsible for this tiny step toward a less fuckheaded global society.

Many millions of people would be outraged beyond measure, including, perhaps, most of the people reading this; within this aggrieved group, at least a few hundred would be angry and reckless enough to concoct and attempt to carry out a plan to literally kill me.

Assuming that I was even concerned enough about this situation to take evasive action, to I’d have to go into permanent or semi-permanent hiding like Salman Rushdie or Edward Snowden. But I wouldn’t care. I would sometimes rather be living in a remote bark part of the Blue Ridge, subsisting on grubs, bark and the occasional morsel obtained during a dumpster-diving sortie under cover of darkness, than have to confront the excoriating downsides of living in a society in which the functional illiteracy of practically every teenager and most adults is floridly put on display in concert with dangerous driving or perambulation.

You don’t have to remind me of the many unrivaled conveniences of this mode of communication. I’m aware of every one of them and have put most of them to use just as you have, sometimes being moved to hammer a closed fist repeatedly into my crotch all the while thanks to a combination of frustration, rage and shame. My answer to this is that text messages almost always originate with devices that function as telephones, which means that anything you absolutely need to convey at that moment can be spoken out loud to your target. Almost without exception, you could also send an e-mail instead, which in most cases is like sending a more considered, less idiotic and abrasive and pointless text.

Tough shit, retort I. In a real emergency, I’m sure you can stop what you’re doing and find a way to make a call or send an e-mail. Deal with it. Plan ahead better. Bring a book with you in case you get bored during the eight whole minutes you have to wait for the bus or whatever.

A somewhat more relaxed and even useful policy would be to force the phone companies charge $1 for any text messages sent and read, 75 cents of which would be donated to a charity selected by the account owner at the time he or she signs up for service. This would eliminate most ill-considered and gratuitous texts as well as increase the operating budgets of the ASPCA, the American Red Cross, and various disease-research entities. It would probably pour more money into hate groups like the KKK and the Southern Baptist Convention, but om balance it would stand as an extremely useful policy.

3 thoughts on “Heres how I’d fuck with ur life if I could, LOL!”