First, Steve McConkey will be happy to know that his “worldwide press releases” are being picked up and mentioned by at least one high-traffic blogger outside the Evangelical clown-bubble. Hemant Mehta of The Friendly Atheist, who made a note of Mr. McConkey’s antics in 2015, has addressed Steve’s grousing about transgender runners being allowed to run the Boston Marathon. The only thing Hemant gets somewhat wrong is calling Steve the leader of anything. Steve is the president of 4 WINDS in the same way I am the chief executive of this blog, except that I am 1) not illiterate, 2) not asking anyone for money, and 3) not a lunatic, although I certainly seem to be involved with crazies to a suspicious extent.

Second, Steve is none too pleased about my blog posts mentioning him, though of course he’s too much of a coward to link to them for the benefit of the jabbering imbeciles who follow him: 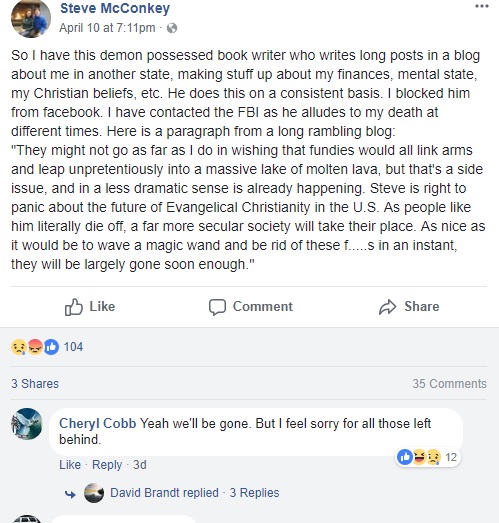 Leaving aside the hilarity of him giving me even more fodder to make fun of him, the ironies just explode in all directions here. Steve is, of course, among those calling for Bob Mueller and the entire Justice Department to be fired, yet he expects the FBI to investigate someone for the crime of making fun of someone on the Internet. And he has spent close to four decades using the mantle of Jesus to try to marginalize gay people and their supporters while doing nothing else with his life, yet treats being criticized as the end of the world. (By the way, Steve, pointing out that fundies are dying off is not a death threat. I’ll be dead someday too — should I call a suicide hotline?)

Also, it’s telling when people can’t help but whine about their Internet foes, yet refuse to provide links to what those foes have written so that people can judge the situation for themselves. Steve would say that he just doesn’t want to give me any attention, but that’s transparent nonsense; Steve, despite touting himself as a paragon of convictions, is just a garden-variety coward. Kim Duclos was always the same way before going into remission; she often prated on for the benefit of her few Facebook friends about her supposedly psychotic ex-coach, but was petrified to make it easy for them to read the things she was bitching about. (A few of them have, of course, discovered this stuff anyway in  the interim.)

Of course, playing the victim is a sine qua non of Evangelicals, who are determined to be charmless in every imaginable way.

Steve McConkey is just one weird cat. He is continually deleting posts from Facebook and his 4 WINDS page, which is not something anyone confident in his ideas actually does (also smacks of my erstwhile harasser).

Steve says he completed three marathons and that he “used to run 20+ miles in five something per mile,” yet doesn’t offer an actual marathon time, despite affirming the total number of miles he “has ran” with great precision. Perhaps he did some of those races I’ve heard about that are longer than 20 miles but shorter than 26.2.

As I’ve pointed out, Steve’s whining over a period of 37 years and counting as amounted to nothing, unless you could progress in reverse. He’s spent four decades trying to eradicate gay people and atheists from the sports world and all that’s happened is that gay people can get married all around the U.S. and atheism  is growing in numbers all the time.

The key thing to remember is that people like Steve who create pile after pile of Christopathic nattering are operating nothing more than a giant Internet circle-jerk. As much as Steve likes to boast that his “press releases” circulate around the world and so on, this means only that other stunningly stupid Bible-boppers like him are eager to post his trash on their sites, as this doesn’t require any additional resources.