This “divine embarrassment” series of posts concerns polybigot and preacher-in-a-bubble Steve McConkey‘s public statements about the COVID-19 pandemic, all of which he has erased or will have erased by the time you read this. Because virtually everything he says on matters of importance is either a purposeful lie or aggressively misinformed, it’s not 100 percent certain that these posts in fact represent his most embarrassing body of work; indeed, his recent unapologetically racist postings (and there are lots more where those came from) have probably been more jarring than his pandemic-denying ones. But because numbers and numerical predictions can be evaluated in an objective way, the scale of McConkey’s failures concerning the coronavirus outbreak are correspondingly stark, and it continues to astonish me that someone who’s not actually trying to heap ridicule and public opprobrium on himself can be so absurdly wrong about so many basic matters of shared importance.

Before retreating from the entire issue in scurrilous shame at the same time Donald Trump himself did, McConkey was supplying enough stupidity on COVID-19 for someone to blog about every day. But the  lack of an official endpoint to the pandemic makes it hard to figure out when to dump more posts about him into the Internet sewer produced by Googling his name. His original bold predictions become more wrong with every passing hour, and he keeps adding to the mess because he has decided that the joy of his post-delete cycle outweighs the cost of those foolish posts never actually disappearing — and he’s quite concerned about this.

The other part of my reluctance is that I wish he were right, even if his understanding of every salient aspect of everything he blathers about is either a lie or a misapprehension. In a better world, COVID-19 really would have proven a nothingburger or at least something on the scale of McConkey’s most generous — that, is realistic — prognostications.

But he’s still a dumbass who needs to be called to account no matter his obvious inherent limitations. He’s surrounded by presumably sane people egging him on, so here we are.

As of the first day of spring, four months ago today, McConkey was eager to let the world know that the United States had suffered only 218 total COVID-19 deaths. Total. At some level, this knucklehead probably knows how to construct a simple graph including two or three points and create a rough trend line, but he was praying for a miracle instead.

As a result of the galactic — and to the rational world, wholly expected — rapid increase in virus deaths and the president’s unusually incompetent handling of the pandemic generally, it’s hard to know what to even include here. But since everyone knows where things now stand, I’ll try to refrain from overly descriptive captions and just rehash the best of McConkey’s deleted scenes leading up to about Memorial Day.

McConkey ushered in the spring by lying about being on a cable TV show.

He then confirmed two things: He believed 55,000 deaths in a single flu season is a concern, and he’s proud of Trump for calling COVID-19 an emergency despite its not posing a meaningful threat. 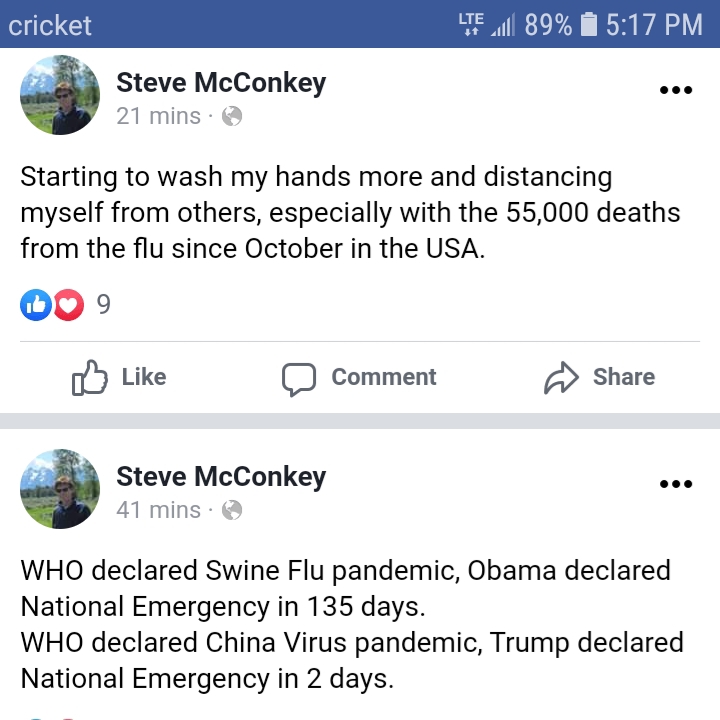 And once again, the media ws refusing to be honest: Only 483 deaths in all.

Note in the same spirit as before that McConkey claims to consider 282 deaths a day over an extended period to be a grave matter. Over 140,000 people have died of COVID-19 in the United States in just the past four months, or 120-ish days. That’s well over 1,100 a day, which in turn is somewhat more than 282 a day. And after a lull, daily totals are back over 1,000 a day and rising. Yet at no point — though it’ll be a few weeks before you’ll see this explicitly — does McConkey acknowledge any of his almost countless mistakes.

It has to be painful to endure the combination of vastly overrating one’s game and being continually wrong even when the correct answers are being rammed up your ass from every direction, inasmuch as such a feat is anatomically feasible even as a crude metaphor. I don’t see how this kind of personal unrest translates into believing that the entire Bible is about Jesus calling for the dissolution of gay sex and even intrusive sexual impulses the world over, but thankfully most of us have less self-immolating outlets for managing our insecurities.

(I now take my occasional glum pause to ponder how fantastically dumb a person has to be to latch on to any of the aforementioned ideas, and how unfortunate it is to live in a country where the commingling of politics and religion has allowed millions of hopelessly inbred idiots to exert ruinous influence.)

Now for some teaching.

The raw fatality rate for the “China Virus” presently stands at 147,000/4.1 million or ~3.6 percent. Great news for the USA medical system and those freeloaders who extend their virtual hands rather than perform some kind of honest labor in exchange for compensation.

Next comes some really bizarre — but typical for McConkey — braggadocio.

This idiot from Wisconsin remains an idiot from Wisconsin and nothing more. Go ahead and contact him and ask him if he’s still happy to align himself with these or any conclusions from the White House; despite starting that e-mail thread with a blackmail threat included, he has become extraordinarily reticent about communicating with me directly.

Next, this expert in communicable diseases decided that viruses are cells, which are, notably, biological entities found only in living things. If viruses contained cells, they would have their own enzymatic machinery and have no reason to invade biological systems in the way that they do, though they still might have turned out to be pathogenic. 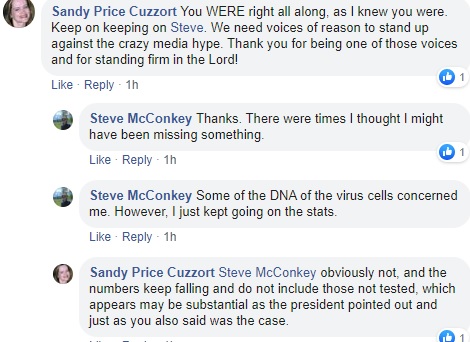 That Cuzzort person cheering him on is supposedly a registered nurse.

Where are we? Oh, March 24. Yep, in this post I’ve covered two whole days’ worth of McConkaterial and I’m now four months behind. It’s not important that I ever catch up, but jeez.

As I keep mentioning, McConkey has realized, for now, that his plan to upend my life with a combination of lies, threats, and re-hashing of my drunken exploits of yore is never going to succeed, though I won’t go so far as to say he understands that he has made a mistake. But he’s not afraid to signal his dislike of my…well, he’d call it “work,” but it’s more of a pastime initiated at McConkey’s own request — to the volatile yutzes in his Facebook bubble.

As incoherent as this is, if you can even get past your own laughter at his claims to bravery, much of it was fed to him by Kim Duclos, that gem of a presence who was happy to pass along her fever-dreams about me being on disability and so on. Like so:

Kim thinks, or at a minimum pretended to believe at one time, that I’m waiting for my girlfriend’s nonagenarian mother to die so I can move into a more expensive house, and she practically salivates the idea of that all going to pieces. Those posts above are a few years old, and were also wiped from the Web by their creator soon after they were posted, but V 2.0 appeared more recently:

It’s helpful that he says these things, because the only people who resort to such gibbering — no matter its form — are those who don’t have facts on their side. It’s far more important to me to point out the dark and shitty nature of Evangelicals as a rule than it is to somehow prevail in an unwinnable war against a lone Internet goober, and this kind of stuff is a perfect reason to keep at it.