My continuing analysis of Madison, Wisconsin Christian bigot* Steve McConkey, an openly wasteful adventure that to him constitutes harassment because he can neither refute nor erase it, led me to another of Steve’s Christian Newswire specials, or as Steve calls them, worldwide news releases out of Washington, D.C. These are the breathless and unintentionally comical productions that Steve and other credulous yokels for Jesus pay $80 or more to have flung at various Internet inboxes and printed in a different font, with all misspellings and other mistakes left helpfully intact. Some of these florid narratives are picked up by loons of a similar orientation; collectively, these fringe entrepreneurs desperate to reap the rewards of nonstop whining and lying are ignored by bigots of consequence,  because most everyday bigots are merely unpleasant and dislike crazies as much as everyone else.

One of these outlets decided to spruce up Steve’s original headline and blast it at readers in all-caps (top part of the image below). You’d swear from this stuff that linebackers and drag queens were lining up together outside conservative churches and smashing in car windshields with bats in the parking lots. Or maybe just pointing at each other’s crotches.

What if everyone who answered a knock at the door to an uninvited envoy for some version of Jesus or another started complaining en masse about being harassed by weirdos? If someone came to your door to ask you to accept that everyone driving a foreign car will be set on fire at some point, you’d have every reason to alert someone with a badge or a net, and that story has no less to back it up than prattle about a dead Jew coming back to life and soaring into the sky like a superhero, but one with with crippling social anxiety based on his track record of not coming back every time someone in the know says he will. He’s 2,000 years late as it is. END_OF_DOCUMENT_TOKEN_TO_BE_REPLACED 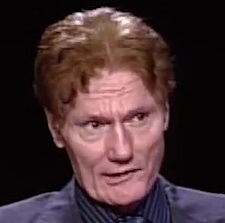 Executive summary: In 2018, I wrote about one Steve McConkey, an unusually crazy and unlovable bigot. Last Friday, he demanded that I remove those posts or else he’d ruin my life by exposing evidence of my sordid legal past, just like he ruined my life last year when he revealed to the world the previously unknown fact that I was once a drunk and even went to jail a few times as a result. I confess that I am deeply afraid of admitting these things as I begin my fourth straight alcohol-free year in a row.

I refused to comply, not kindly, and informed Steve numerous times I’d be publicly posting our exchange unless he immediately directed his energies elsewhere. He didn’t, so here it is. That’s the raw file, available for anyone who might doubt the veracity of the heavily annotated version below. (Obviously I have the real original as well.)

Steve’s mood and level of coherence varied considerably over the weekend, as is characteristic of people who look like the person in the photo above does. On Monday I told Steve I’d be reporting further contact as harassment. Despite not knowing many words or how to use them properly, he craves having the last one, so kept messaging me, even after I forwarded him the e-mail I’d received from the Madison police confirming my report to them. Ultimately, the Boulder Police Department also had to get involved, and warned off this cheerful slice of humanity, much to its immediate anger and throaty dismay. He wrote at least seven different online postings in the next two-plus days about me stalking him, every one of which attempts to portray me as an aggressor. By this morning, he had started deleting these and replacing them with new ones, as is typical for both him and crackpot Internet users in general, and my pointless exercise in discretion concerning whether I would post this ended.

Remember: I have written nothing about Steve McConkey since July 2018, and until last Friday had had no contact with him at all.

This image from last July made it into the e-mail exchange as well, but it’s important to fix it in your mind because it represents an actionable claim — provably false and with the intent to defame. And even though no one of consequence pays attention to what Steve says — including, it seems, his own adult children, bless their hearts — he does have close to 5,000 Facebook friends. (Never mind the substance of the post, which as usual bears little resemblance to the reality experienced by virtually all others.)

I’ve already been told by various lawyers that this would be a slam-dunk lawsuit, and Steve has his dear friend Kim Duclos to thank for that one. But even if I felt like going after him, he doesn’t have any money, and even if he did have worth and I could sue him for free, it’s just a lot less work to periodically knock him into a state of agitation so gripping and extreme that he’s unable to harass anyone else for a spell. I’m announcing this, and he won’t be able to change his behavior anyway. I can already tell you what his next eight steps will be after he reads this.

That’s all you really need to know and represents the most merciful accounting of the events I can command after a number of halfhearted tries at rhetorical restraint. So, if you don’t want to be triggered by unkind descriptions of some of our close primate cousins in the world of Evangelical Christianity, and my various plans to disrupt some of their miserable and pointless lives, don’t read further. You may start bawling hysterically like Steve himself does when people accurately describe the indefatigably misguided maniac he sees leering at him from the mirror. END_OF_DOCUMENT_TOKEN_TO_BE_REPLACED